What Taylor Morrison hasn't figure out yet, was learned by most of the US based manufacturing companies (like Dana Corporation) back in the 1980s. The cost of bad initial quality,  and the need for quality control and rework is much higher than investing in great quality to start with.  I was part of an initiative called "Project 90" at Dana that sent manufacturing leaders to Japan to learn how they were so meticulous with their builds.  It ended up that manufacturing plants that used to have 10% of their workforce in a Quality Control department, transformed to building better products with no need for Quality Control.  The old way of thinking was "we'll fix it later." That had to be debunked for them to transform.  Transform they did.
My wife and I started a nearly year long process of building a house with Taylor Morrison in early 2016. The model home we fell in love with had all of the features that we had seen spread across other homes, all rolled up in one beautify model.  We could tell after years of shopping that this was the right home,  and a quality builder. It was expensive, but you get what you pay for right?

The first meeting we had with our builder (Chris, the project manager ) was a few weeks before ground was broken.  He said a couple of things that stand out:

So far so good; still excited. A few weeks later we had a slab, some walls,  and things were progressing well.

Once the framing began, I started to notice some sub-par construction that Chris told we was "within spec." He would say "If the inspector passes it, it's ok." On interior walls and especially on complex hangovers, the boards wouldn't even come close to joining.  "It's not load bearing" was the rule.  My Dad taught me a long time ago that crappy work always comes back to bite you. 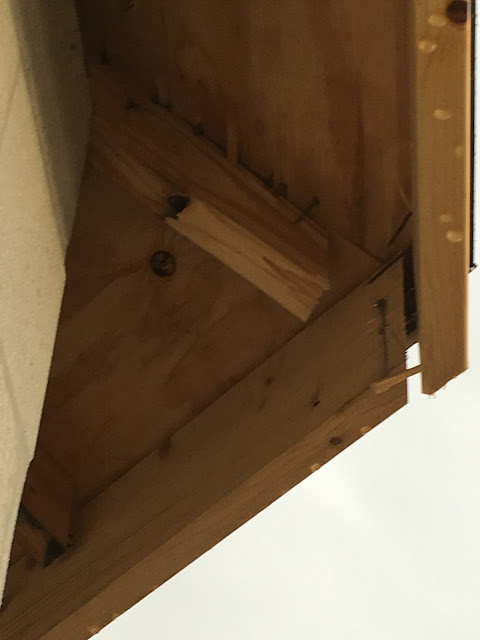 This picture may look like something that was fixed, but it wasn't.  It was covered over with other materials.  "It's not load bearing, so it's ok."

Another item we fought with was the rain.  The house was pretty buttoned up with the roof & roof liner, but they did not put any cover on the kitchen stove pipe, or the garage vent pipe that both exit thru the roof.  I twas told it cost too much to have the roofer put a cover on them.  In the meantime,  the rain poured in on the drywall to the point that the wall behind the stove was soaked.  A 5 gallon bucket on the pipe would have saved the drywall that was ultimately replaced (although not officially connected to the wetness).

Problem after problem came from a perfect combination of poor workmanship; no supervision; non-existent hand off between trades. Here are a few:


I could go on and on, but suffice it to say.... this has been a nightmare. It's not our first home build. We went thru this process with Centex a few years ago and had huge success.  Never anything like this.


It's kind of like buying a car, for full retail, that has been wrecked three times but fixed.  Under the shiny new paint is a lot of bondo, wrinkled metal and broken pieces. Sure looks nice on the outside and I don't really have a choice.


Unfortunately there is no way to get out of the deal, and we had to close on it.  After what we witnessed, we didn't even want the house. I know what's under the covers.  It's kind'of like child birth (I'm told): lot's of pain during the process but you get something nice in the end that will last a while.

On a side note, I hope to get an audience with the CEO of Taylor Morrison.  I could easily cut 20% out off their building costs simply be applying techniques learned in Japan back in the 1980's....

UPDATE 2018
After more than a year in our new house, almost everything got fixed and we love the house. Taylor Morrison made it all right and built us a nice house. Unfortunately, I got to see how it was built and what is hidden under the shiny exterior.