I've had my TT for a little over a year.  It's a base model with a couple of options, but after a year I'm still loving it.  If you know me, you wouldn't be surprised to hear that I've been wanting a 911 for the last 10 years or so. With a pending end-of-lease in 18 months I thought it might be time to start checking out the 911.

I am not a track guy or really anything more than a normal guy who likes cars. I’ve averaged a new car almost every year sing I turned 16. It’s been a huge waste of money, but God wired me with the passion.

Sarasota Audi had a cool 2014 911 with 30,000 miles so I set up an appointment with Fred Brown and took it for a test drive.  Right away, I fell in love with how it looked. It had a camel interior - nothing I’d ever buy but still very nice. 2014 was before the day of backup cameras so I was quick to realize just how dependent you become on them. 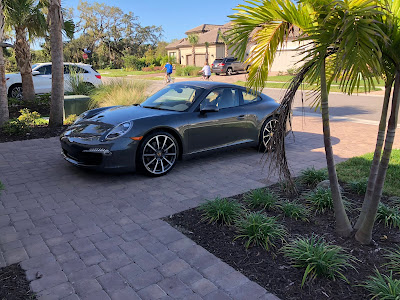 We headed south on I75 hoping for a clear on-ramp and a chance to accelerate, but got stuck behind a couple of blue hairs and had to wait for an opening.

Response to a floored accelerator felt like we had some terrible turbo lag and a hole in our muffler. Nope - just the way a 2014 performs and sounds.  I will say that the speed was easily attained but the feeling felt light compared to the TT. Fred had mentioned how the 911 can feel a bit ass-heavy and he was right. Now remember, this is my first drive in a 911 and I’m used to my TT that is very front heavy.

So we come to the 681 connector where a bald eagle swoops across the road and grabs some road kill on his way. Right turn on Honore and we’re headed back to the dealership in a nice curvy road.  Over the years I’ve had a couple of Porsche Caymans and liked them better - but they were both new when I got them so it’s not a fair comparison.  This car was not bad - just felt dated. 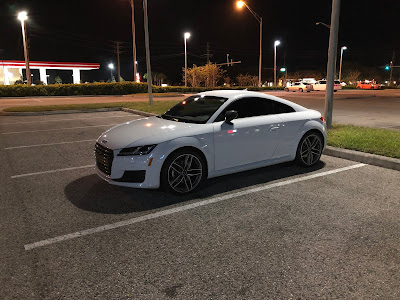 
HANDS DOWN - I'LL TAKE THE TT

I could tell there was really no decision as soon as I sat back in my TT to drive home. Seat felt better; quieter, more luxurious; totally faster... all better. Electronics were way cooler (Audi Virtual Cockpit); stereo sounded better.  I mean everything about the TT was better.

I’m still planning to get a new 911 in the next few years but really need to be wowed first. Next time I'll try a 2017+ 911 to take advantage of the twin turbos but for now, I'll keep the TT.

Wait! There was one thing on this 911 (besides the exterior looks) that I was excited about: my twin 5 year olds climbed into the back seat on their own -- no help from Dad.  This is huge because they can't do that in the TT.  I mean, they can't even fit in the back of the TT as the front of the back seat is butted up against the front seat back.  There simply isn't even an inch of space between the seats. In the 911, they pulled the lever on the seat back and climbed in the back -- no problem at all.  That might just be enough to tip the scales :)


...and then there is this bit of excitement from Porsche:
Porsche shows off next-gen 911 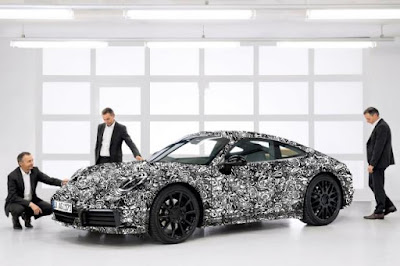